Staying connected: How PRISMA is facing the challenges of a global health crisis

At PRISMA our response has been swift, moving from being an office-based organisation to an exclusively remote one in a matter of weeks In this blog post.
Victoria Schuster 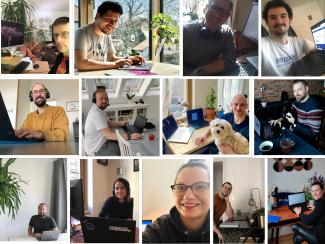 The Covid-19 pandemic continues to have a dramatic impact on the world of business. At PRISMA our response has been swift, moving from being an office-based organisation to an exclusively remote one in a matter of weeks In this blog post, I discuss the ways in which we’ve adapted our day-to-day approach to ensure we emerge from the crisis in good shape.

No business of any size or scale could possibly be fully prepared for the kind of rapid change demanded of it by the ongoing Coronavirus outbreak that has ground vast swaths of the global economy to a halt.

It’s certainly been a challenging time for everyone at PRISMA, but with relatively minimal disruption we’ve ensured not only that our platform continues to operate as normal, but that our entire team can do the same – with the only tangible change experienced being one of scenery. For readers interested to know how we’ve navigated this challenge, here’s how we’ve made it work.

Putting remote working to the test

There’s little question that many of our long-standing working practices and company values have served us well during this unprecedented period. Empowering staff in a way that encourages them to work independently and make their own decisions is a key component of our established working methods and it’s fair to say that recent weeks have tested their efficacy to the maximum.

The fact that most of our team are already familiar with remote working has also helped us pull off what, until now, been a largely seamless transition. With no confirmed end date  for a resumption of normality, and an expectation that we may well be in this for the long haul, staff were invited to take what they could find – be it mouses, screens, headsets, keyboards, laptops, chargers and anything else – to help replicate their office environment in their own homes.

What’s more, from day one all staff were equipped with a VPN connection that would allow them access to all of the essential tools and resources that they’re used to having at their disposal.

So how have things actually changed?

As already mentioned, when it comes to how the platform runs for our users, it’s been business as usual – and customer satisfaction has so far remained unaffected.

As for the changes imposed on our team, it’s of course early days and it will inevitably take a while to determine any impact on productivity and general happiness levels. But there’s no doubt that moving everyone to remote working has necessitated a distinct shift in attitudes and approach.

Ensuring clarity in our written communication

Deprived of the option to pop across and ask for input from a colleague, the written word has – along with video calls – become an increasingly prevalent form of internal communication. And so with this has come an added responsibility to be as clear and unambiguous in what we write as possible. No longer is implied meaning sufficient – clarity is everything.

For some, this adjustment has come naturally, but for others who perhaps have a more neutral or informal writing style, it’s been more of a challenge to ensure that their words don’t leave any room for misinterpretation or need for clarification. To help with this, we’re encouraging the use of emojis and GIFs to ensure that the absence of non-verbal communication doesn’t cause jokes and other comments to be misunderstood.

Equally, the need for transparency has also become more urgent. With colleagues no longer in the same physical vicinity, updates on where we are with a task have become more frequent so that everyone is kept in the loop about how things are progressing. A more joined up approach has been one of the most notable changes we’ve seen since remote working.

One of the most unusual aspects of this situation is that it’s forced entire households into an often inharmonious blend of domestic and work-based responsibilities. With schools closed across Germany since mid-March, many parents have been left having to juggle the split demands of home-education, chores and work – all under one roof.

To put it bluntly, many people’s home lives have been thrown into chaos, and everyone at PRISMA is having to bear this in mind when making demands of colleagues – particularly those with children. For such people, flexibility is key right now, and so wherever possible we are helping them to work their scheduling around these domestic duties.

At PRISMA we’ve always encouraged finding time for social catch-ups with colleagues. And when thrust into this situation we very quickly decided it would be important to maintain these positive habits while working remotely. With fewer than 50 members of staff, we are a close-knit group that includes many strong and lasting friendships – friendships that, at a time like this, are as important as ever.

Of course, whereas normally these catch-ups would be in person, we’ve now had to move them into the digital world. So each day we host a virtual lunch for anyone who wants to join and we also have once a week post-work hang-outs where people can eat dinner or share a drink together in front of a screen.

In the absence of sharing physical spaces, we’ve also been getting creative with ideas for how to keep things fun and sociable. For example, we came up with a ‘chat lottery’ to compensate for the fact that we no longer bump into people randomly in the kitchen. Instead, people can request a chat with someone and it’s then pot luck who they are given.

We’re also running weekly bootcamps where people can exercise together virtually, a photo challenge inviting people to send in quirky pictures of things they’ve been up to in their spare time, bingo, and a quiz too – all designed to keep that connection between us during this difficult period.

Checking in on people’s mental well-being

Mental health is inevitably a tinderbox at a time like this and it’s been at the forefront of our efforts to provide support for our colleagues. Specifically, we’ve encouraged people to listen to their emotions, take a break if they feel the need, and consider practices with proven therapeutic benefits such as meditation and yoga. And of course, if anyone is in need of direct emotional support we’ve made it clear that no team member should hesitate in coming forward for help, with full and guaranteed confidentiality.

While many companies responded quickly to the crisis by halting their recruitment processes, at PRISMA we’ve chosen to keep the ball rolling – using phone calls and video calls as a substitute for the face-to-face interactions of more ordinary times. This has in large part been to deal with the fact that we’ve had new team members due to start since before the crisis took hold and we decided if it was possible to on board them remotely, we should do so. This has so far been highly productive and we of course look forward greatly to meeting our new colleagues in the flesh.

The first few days were somewhat daunting, because it was unclear at that stage what people would need in terms of resources, support, etc. So initially I reached out to different colleagues each day, just to keep in touch, which helped reassure me that I was on top of what needed to be done. Of course, this load has been shared by others too – especially team leads, who are all doing a fantastic job in the circumstances.

What the future holds

So how do I think this whole episode may affect the future? I would probably best describe it as a useful proof of concept. If nothing else, we’re going to learn how people feel about working remotely more often, how it affects efficiency, productivity and satisfaction levels, and whether it could be viable to extend remote working opportunities when things eventually return to normal.

On the other hand, I’m in no doubt that we’re going to enjoy being together again whenever that may be – hugging each other and appreciating the relationships we’ve built. It’ll certainly be an emotional moment, because even though we can’t do these things right now, in a strange way I feel even more connected to my colleagues than ever. Sometimes going through difficult times together can unite people.  And this, more than anything, fills me with hope for the future.